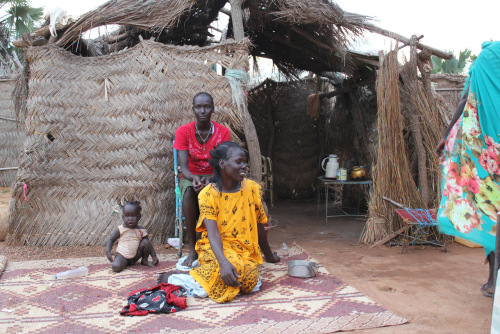 Finding something to eat in Northern Bahr El Ghazal is always very challenging. On our initial trip in July, we pretty much ate beans and rice at every meal. This time we decided to go to the market and select our own food. We then convinced the hotel cooks to prepare the meals for us and paid them separately for the work.
The market had a small selection locally grown food. We got pumpkin, eggplant, different kinds of greens, tomatoes and cucumbers. It was awesome coming back from the field each day to a delicious dinner that was something other than beans and rice. 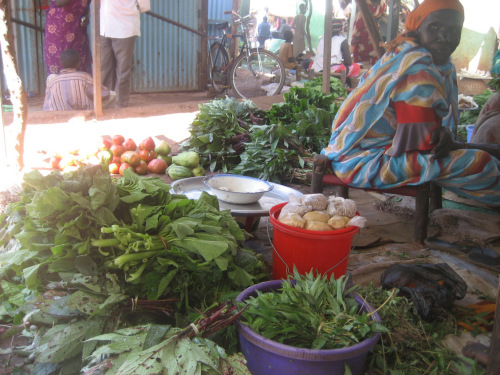 Everything was working beautifully until one day the cooks had a dispute over who was cooking and how the money was divided. After that, the food started coming out cold and not well prepared. I was nervous about having people who were not happy preparing our food, so we abandoned that plan decided to go back to eating beans and rice in town.
We knew we weren’t staying at a Four Seasons, but as the days progressed our hotel became increasingly taxing. I tried to make the best of things but some days it was hard. We brought our own sheets and towels but it was still a real challenge. The US health department would have shut them down by American standards. The place was unbearably hot; there was no toilet paper half the time, a dirty, leaky bathroom (ironically), and beds with no mosquito nets, just to name a few things. On top of this, it was expensive. But there was nowhere else to stay. Breakfast was included in the price. It consisted of tea and bread, and they were usually out of either one or the other.
One day we met a veterinarian from Vets without Borders. He had lived in Somalia for 30 years and was doing some fieldwork in the area. We became fast friends when I shared an extra tea bag and some bread with him after the hotel told him they had nothing for his breakfast. I enjoyed talking to him about his work and was disappointed when he informed me the hotel was too awful for him to stay and he had contacted a friend from another aid organization and was going to stay in their compound. I realized I would need to make some friends of my own, and quickly.
There was a small fridge in the room with a freezer that worked overnight, when the generator was running. Every night I would freeze bottles of water so we’d have cold water for a couple of hours in the morning. The ones I left in the freezer during he day would remain cold until we got back from the field in the afternoon, even though the power was off during the day. Honestly, that cold water seemed like the best thing in the world when we came in exhausted and dirty at the end of the day.
I also paid a lady to heat me water every night for showering. Otherwise, the water from the tap was pretty dirty and cold, so it was difficult to feel clean.
The hot water for bathing and cold water for drinking are maybe the two things that kept me sane at that hotel. We’re definitely going to need to set up our own small compound there soon.
Each day before heading off to the field, we would fuel up the truck from a roadside stand that sold jugs filled with gas. The attendant would siphon the fuel into a hose with his mouth and then put it into the truck. 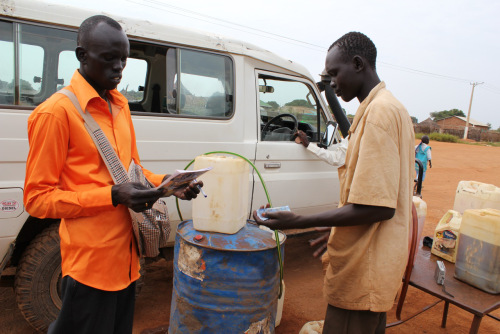 Midway through the second week I decided I didn’t trust our truck anymore. We had broken down several times and were traveling deeper and deeper into the villages. I felt we needed a more reliable vehicle and asked George to find someone else in town who would rent us something better. I felt bad firing Dut, since he’d already been driving us for over a week, but this was not personal. We just couldn’t risk breaking down in these remote areas.
Thankfully, George found us an alternate vehicle that day. We were traveling with the Director of Education for all of Aweil East County, which included 128 schools. We had just left a school and were driving on a remote dirt road when our new truck completely quit. Despite cajoling a number of people to help us push it, our efforts were useless. We had one bottle of water left and the heat was excruciating. There were no other vehicles traveling on the road and no cell reception. We were completely stranded. 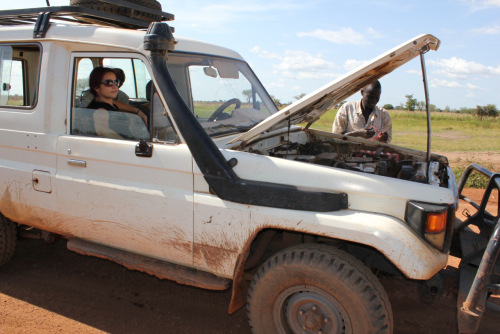 Although we had airtime in our satellite phone, we couldn’t think of anybody to call. The driver tried his friends but they didn’t have another vehicle available. People around these parts just don’t have personal cars and trucks. If you’re lucky, you have a motorcycle. The education director didn’t even know anybody we could call. After weighing all of our options, we realized our only choice was to call our original driver, Dut. By this point it was around 3PM and he was not happy about the idea of driving several hours to pick us up. But he reluctantly agreed. Then we sat at the side of the road waiting, and waiting, and waiting. We were there for five hours total, with one bottle of water, which seemed ironic.
The five of us moved from truck, to shade tree, back to truck. I fantasized about all of the cold things I would drink when I got back to civilization. But everybody remained calm and just tried to make the best of things. I got the feeling that the situation was not new to any of the others. The Education Director even commented that I was really getting see how people struggle. 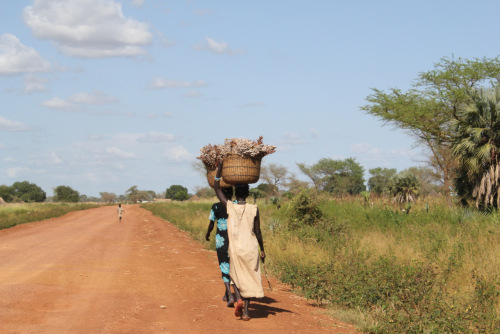 We did, however, meet some very interesting people while we were sitting there. We shot interviews about the water crisis with people walking by and did our best to pass the time. Every now and then somebody would get the urge to try to push start the truck again, and we’d all give it a go. But in the end, it was Dut to the rescue, just as it was about to get dark.
We finally got back to Aweil Town, at about 10:00, starving and exhausted. We searched for somewhere to get dinner but everything was closed or else all their food was gone. I had a package of pasta in my bag, so we found someone who agreed to boil it for us. For dinner that night we had plain pasta poured onto a large, shared platter that we ate with our fingers. But it was delicious.
For me some weeks are easier than others, and this one had its fair share of challenges. That said, it’s tough to complain, because for the people who live here this week was not really too different from any other week. 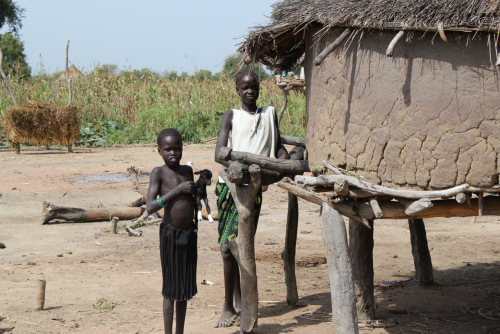