Today is the first-ever International Day of the Girl.   Even here in Uganda we are hearing that the Empire State Building in New York City is being lit up pink in tribute.  It’s so encouraging that the global community is taking on this important issue!
Today UNICEF South Sudan issued a call to action against child marriage, one of the major challenges facing young girls in this region.
Girls around here are routinely married off as soon as they reach puberty and they have no choice in the matter. 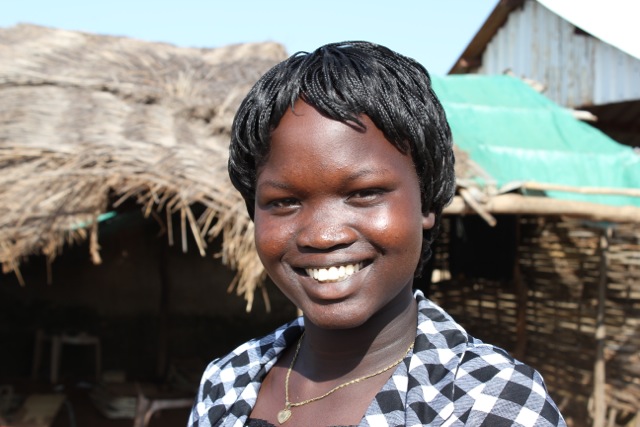 Sarah Awelping is a 19 year-old 6th grader at Salam Girls’ School in Aweil, South Sudan.  I met her recently when we were at her school checking on a well we repaired.   At the age of 15, like many girls her age, Sarah met and fell in love with a boy from a neighboring village.   His name was Garang and the two hoped to eventually marry.   Like many around here she is behind on her education because of the war, and understanding the importance of education, they both agreed to finish school first.
In the meantime, Sarah’s parents were approached by 60 year-old man who offered a large dowry of 100 cows for the young girl.
Despite the fact that the man already had four wives, and many children, Sarah’s parents accepted his offer.   The family was very poor and 100 cows would mean a period of financial security for them.  They would use these cows as currency.  If the crops failed, they would trade them for food.  They would be used to pay school fees for Sarah’s brothers.  And ultimately they would be used to pay the dowries for Sarah’s bothers’ wives.   Girls in this region, and much of the world, bear the burden of being considered one of the few commodities for their poor families.
Sarah was devastated when she secretly learned of her parent’s deal.   She knew the only way for her to be with Garang would be to run away.  So the two snuck away in the night and were secretly married.  When Sarah’s parents learned of the union, they threatened to have the marriage annulled. Fortunately for Sarah she had other supporters!   Her aunt defended her right to marry for love and eventually some other family members also joined in support.   Even though Sarah’s parents were furious over the lost dowry, they eventually gave up.
According to Sarah, girls often suffer terribly when they are given in marriage for a dowry.  The husbands consider them property, since they paid for them, and therefore exert complete control over them.   According to Sarah, unlike a marriage of love and trust, in these arranged unions the wives must ask approval from their husbands in order to even leave the house, often because the husbands fear they will run away.   The relationships are often physically abusive and the wives have no power to resist.
Sarah is adamant that the dowry system needs to change.  She says that, although it worked a long time ago, these days education is important.  She feels young girls should be allowed to focus on school rather than being forced into early marriage.
Although Sarah and Garang are happily married, she is still enrolled in school.   She makes wonderful grades and hopes to one day become a doctor.  She says she has seen so many people suffer and die from illnesses and wants to help.
Sarah’s story is like many other girls in the world.  Child mothers and child wives are a VERY BIG, REAL PROBLEM out here.   These girls would be shocked to know that the Empire State Building is being lit up pink today in honor of them.
They would never imagine that the world cares about them this much!