Camboni Primary and Secondary School in Aweil Town was the location of one of the wells we recently repaired. The school was constructed by the Catholic Church, in the 1970s, but they are no longer funding it and the government has taken over.   While we were there observing the work, I met the principal, Antonia Adhel.   I was impressed that a woman was holding in such a prominent position, which is rare around here.    She was also beautifully dressed in the most vibrant African fabrics and was extremely outgoing.  I am always interested in talking about strategies for keeping the girls in school and knew for sure that Antonia would have something to share. 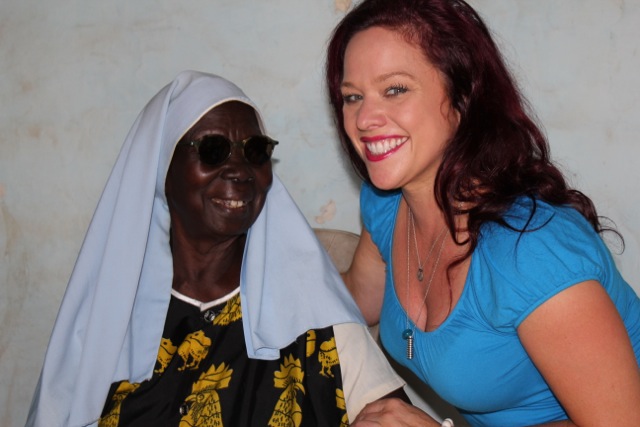 She told me that this school had graduated some of the most prominent women in the country, including the State Speaker for the House of Representatives and the Minister of Parliamentary Affairs.  But she said I should really meet her aunt Sister Sidonia Aman Tong, who founded the school and was now in her 90s.  Little did I know that Sister Sidonia is a legend in Northern Bahr el Ghazal.
We scheduled a meeting for 10AM on Saturday.  When I arrived Sister Sidonia was bright and ready to talk.  She looked like she was in her 60s and had a mind to match.   Her English was better than most and she had a sweetness that is rare in a war-torn area. 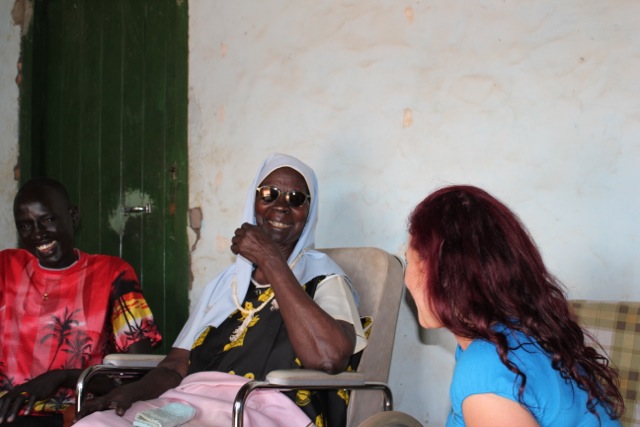 She began telling me her story.  She was the first black Sudanese nun and it had been no easy task.  The story was long and beautiful but basically in the late 30s Italian Missionaries came to Aweil and set up a school and she was determined to go.  She wanted to get an education but not only that, she wanted to be a nun.  The Sisters had such personal pride and she was extremely drawn to that.  But it was unheard of around here to do something like that – everybody gets married and has children!!  And she was very beautiful, with only one sister.  So her family was relying on her beauty to bring a large dowry of one hundred cows, which her brothers and cousins would also to use to marry.
Sidonia went to the school every chance she got and eventually the nuns taught her to cook and began paying her a small amount to prepare their meals.   Finally her brothers came and demanded that if she stay in school that the Bishop must pay her dowry.   Sidonia agreed to pay her own dowry with her money from cooking and continued going with school.
She completed school and officially became a nun in 1942.  Being the first black nun in Sudan, she met with much resistance.  This was not considered appropriate in the culture.   Ultimately she settled in Aweil and started running the Camboni.
Her mind had been opened up to so much and she knew that the village girls would also benefit from school.   She convinced the Catholic Church to buy her a truck and began going village-to-village bringing the girls back to her school, telling the parents that an educated girl world get 1000-cow dowry!!   (I LOVE THS WOMAN!) 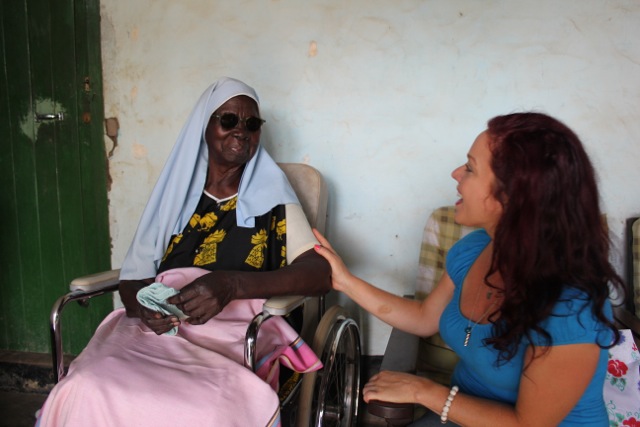 During the war, the soldiers from the North occupied Aweil.  Although Sister Sidonia kept the school open, they were constantly harassed and threatened by Sudan soldiers.  One time she was taken from the school at gunpoint and taken to the barracks. The soldiers threatened her life and insisted she stopped teaching the children English and that she only taught them Arabic.  She refused and told them they would have to kill her before she stopped teaching English. Despite the threats she continued teaching the children English, as well as Dinka, their tribal language and Arabic. Somehow she knew somehow that the ability to speak English would be important for their futures, and she was right. English is now the national language of South Sudan.
The soldiers did many things to harass the school, including taking the school uniforms at one point, leaving some children naked.  But Sister Sidonia said she was never afraid of their guns and taught the children to be courageous.  When the Antonov bombers would come, she would tell the children not to run but to lie down flat and be strong.
I could have stayed all day listening to her beautiful courageous stories but I could tell she was growing tired.  The long struggle that ended with the secession of South Sudan was fought by many people from many different walks of life, who knew that one of the bravest would be a nun.

We all love you sister Amandit

My condolence goes to the family of late sister and the catholic church at large,her legency will be remembered in NBG and South Sudan all.

Dear Aweilians and the Catholic Diocese of Wau,
Let us be proud of Sr. Amandit for her wonderful works she has done for she is the second greatest nun to Bakhita. May her soul rests in peace and to Cardinal Wako put her name on your top list of things to discuss with Pope Francis to beautify her and later declared her as SAINT for she deserves it to be called as St.Sidonia Amandit.