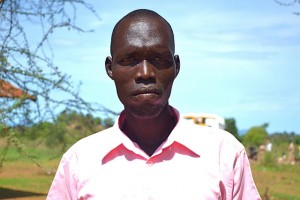 Abdallah Linos is 31 years old and works as a teacher at the Oguruny Primary School in the village of Oguruny in South Sudan. He has been teaching at the school since 2010. The school has only six classes, P1-P6, with 408 pupils.
When the civil war broke out, Abdallah left the village to live in the Kahuma Refugees Settlement in Nairobi, Kenya. In 2009 he came back to his village with his wife and family and started teaching.
Since the well was completed in May everything has changed for the school. For a large part of the year the students would get their water from the nearby hills, but during the dry season this water source from would dry up. He explained to us that once the waterholes dried up and there was no water for drinking, there was also no water to use in food preparation, so the children would be forced to be at school all day hungry. This made things very difficult and affected the children’s ability to learn.