Having been a huge Mighty Boosh fan for over a decade, I was beyond excited when Noel Fielding agreed to perform for our charity Drop in the Bucket. Then when I was told that all of The Mighty Boosh would be performing, I almost dropped the phone in shock. 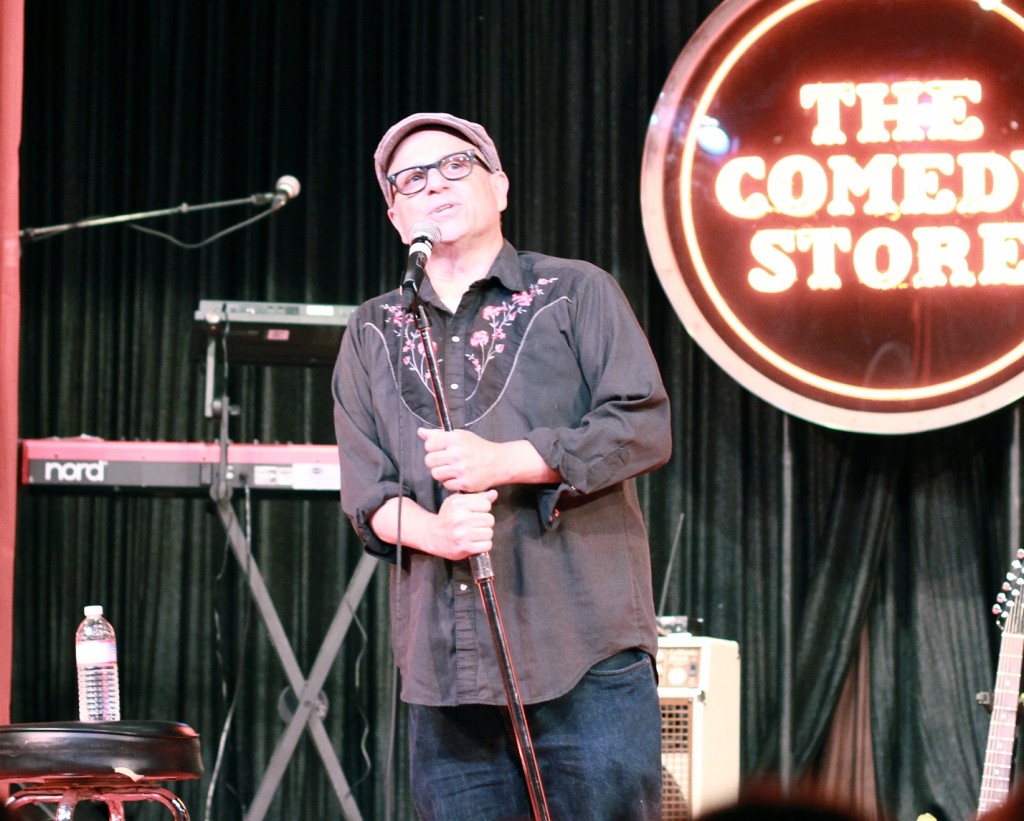 Bobcat Goldthwait was hilarious and after his performance adlibbed what may be the funniest and most politically incorrect PSA ever made by a water charity.
Ian Edwards and Nick Youssef both delivered great sets that had the sold out Comedy Store crowd in hysterics. Justin Martindale did an amazing job as the evening’s host. He managed to keep everyone laughing while still making sure the audience knew exactly why they were there. 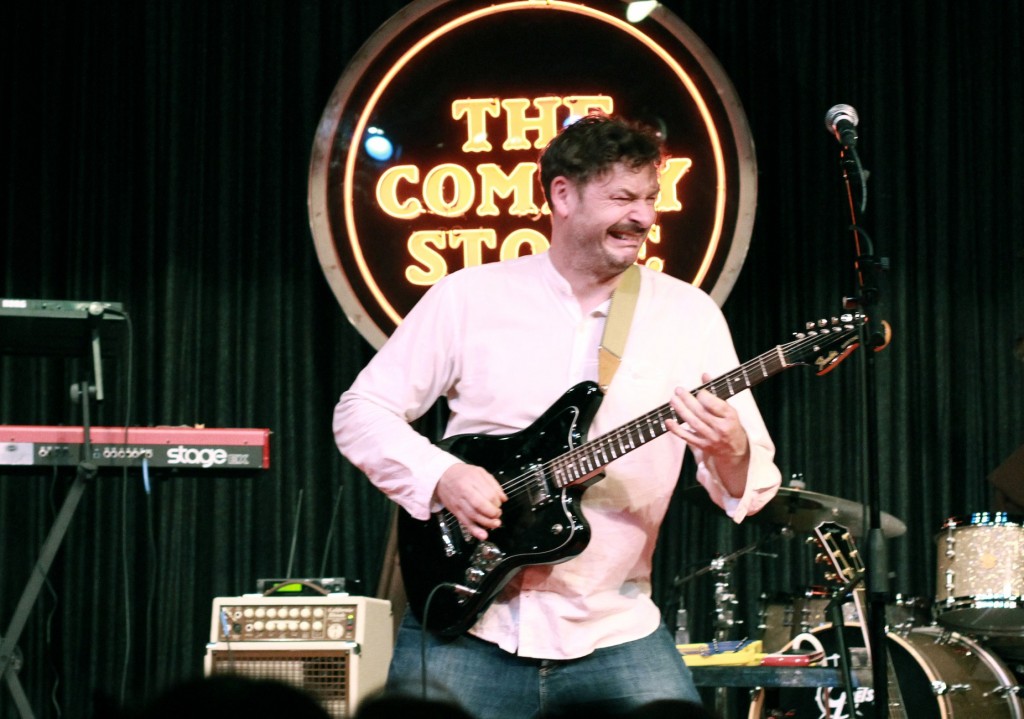 The Mighty Boosh opened with the group coming onstage dressed as monks for the first song. Their performance proceeded to show everyone why they are one of the most beloved and creative comedy groups ever to come out of England. The laughs were non-stop and everybody in the room knew they were witnessing a night they would remember for years. We were so honored to have it be on behalf of Drop in the Bucket. 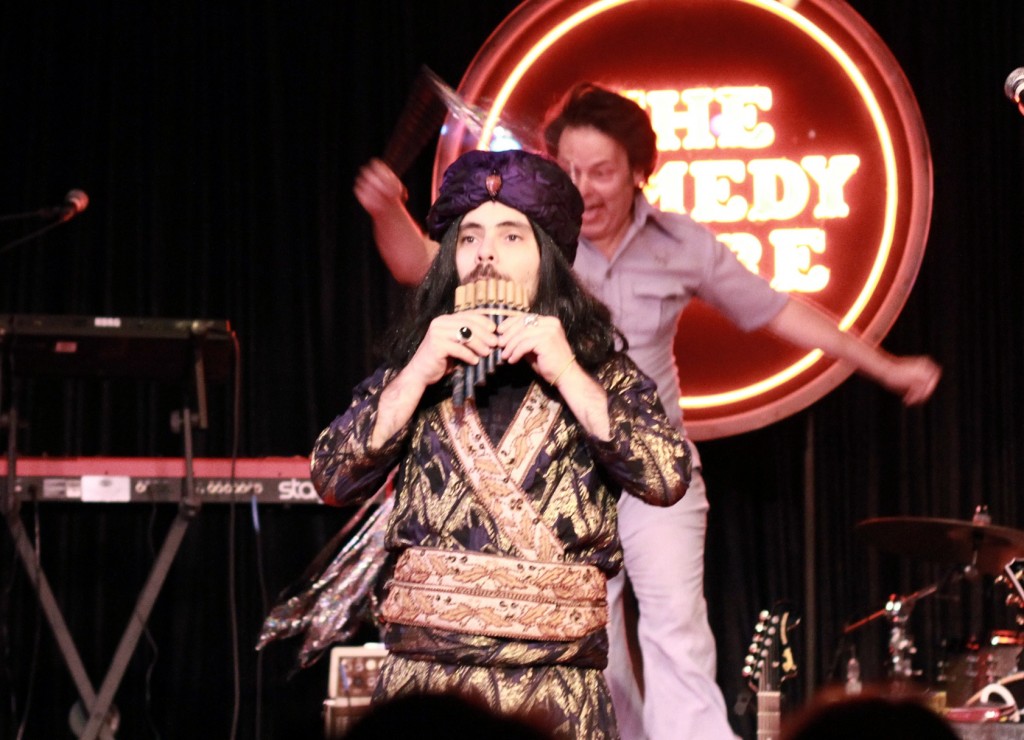 The night exceeded all expectations and all of the performers really got into the spirit of the evening. The event raised over $12,000, enough to pay for Drop in the Bucket to drill two more wells for schools in Uganda. 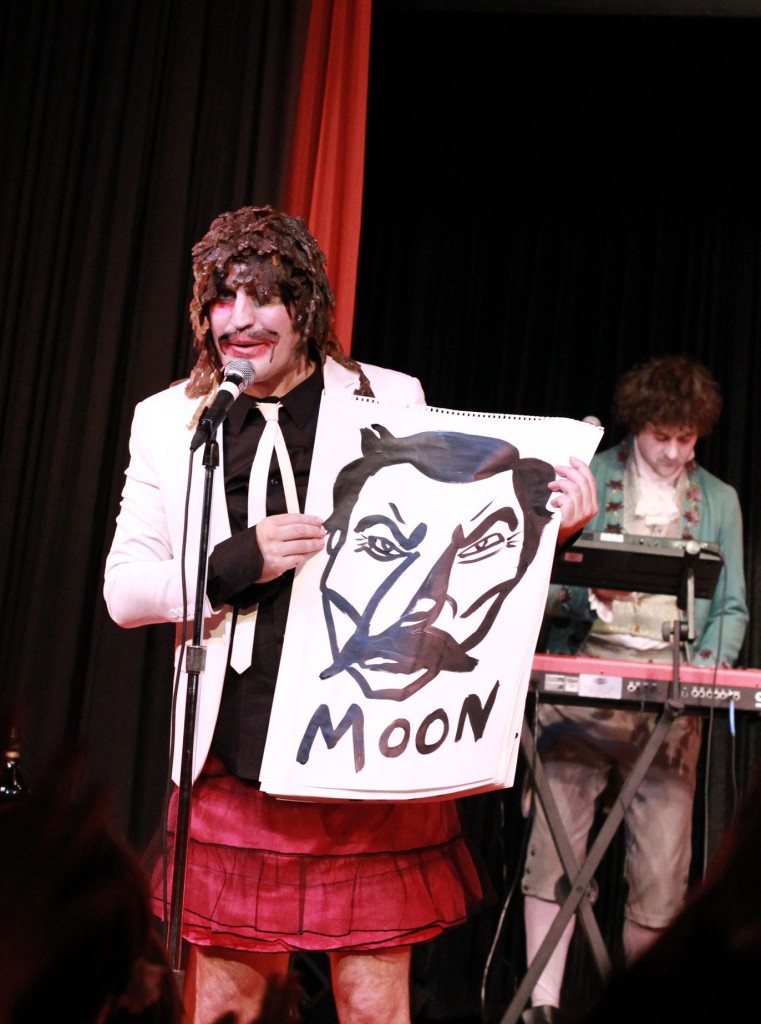 Water wells at schools make it possible for children to go to school and when properly maintained, wells can last for decades. To keep up on the progress of the wells that this show made possible, please check out Drop in the Bucket’s Facebook page . We will also be posting videos from some the performers that were shot backstage during the event.
We cannot thank everyone enough at High Voltage, the Comedy Store, all of the artists and everyone who came and showed their support. One night of fun will continue to change thousands of lives in Africa for years to come.
-John Travis 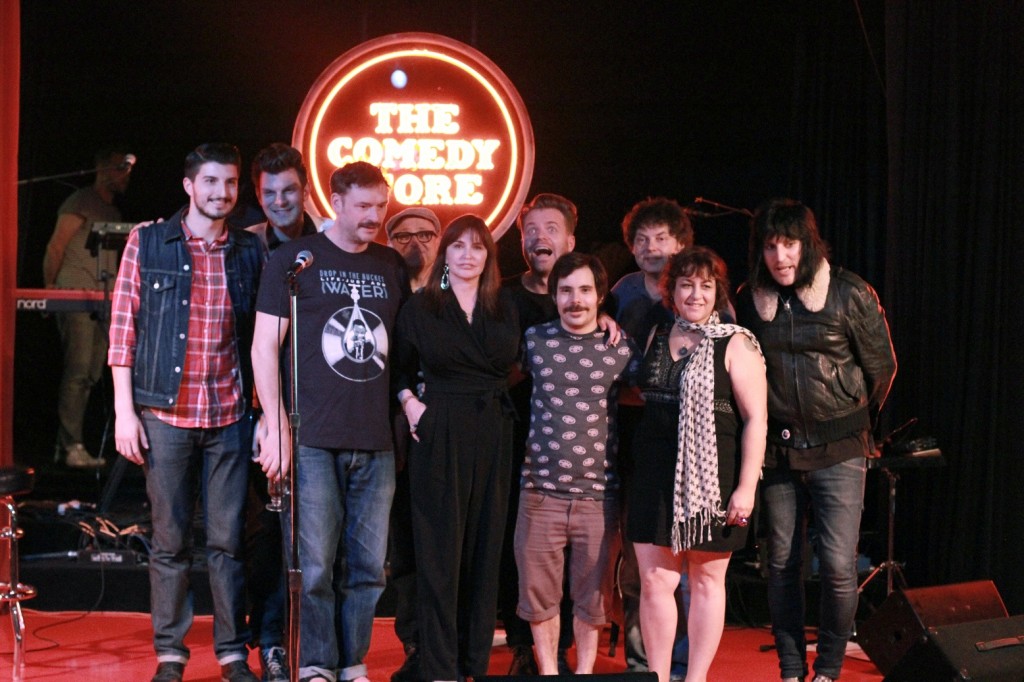 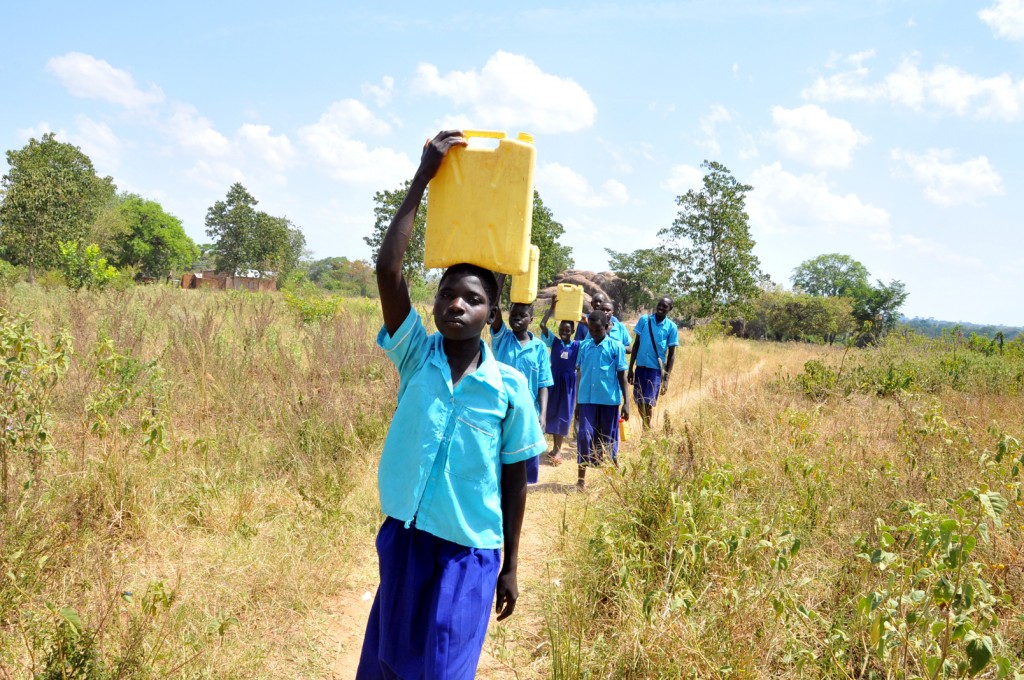 Almost 1 billion people on the planet lack access to safe drinking water.
Dirty water and poor sanitation kill more children than AIDS, malaria and measles combined.
Every 20 seconds a child dies from a lack of clean water or sanitation.
More people have access to a cell phone than a toilet.
Do we just accept this or is it time to do something?
It’s 2013 and the human race has reached amazing heights in technology. We can explore another planet’s surface and even assess its water conditions! But as advanced as we are, how is it possible that one in every eight people on our own planet lacks this most basic resource?
Do we just accept this or is it time to do something?
I used to read facts like these and think ‘I wish someone would do something about this,’ until I realized that I AM someone and the time to help is now.
March 22nd is World Water Day. It’s just one day, but that’s a great place to start.
So how can YOU help?
There are plenty of ways to participate in World Water Day. Why not plan a World Water Day party, or just invite some friends over for dinner? Maybe show them this video.
then encourage them to post it to Facebook and other social media sites.
Read them some of these water facts and then make a donation or even start a fundraiser
Let your friends know that you feel strongly about the clean water crisis and that access to clean water is a human right. You can be a voice in your community.
If that’s not possible how about sharing this video post it on Facebook or Twitter. Let your friends know that clean water is important to you and that you feel everybody deserves the right to drink clean water.
Drop in the Bucket has a few things coming up and we would love you to join us!
Events:
March 15th: President and co-founder of Drop, John Travis, speaks in Fountain Valley at 8:30AM.
This World Water Day event is hosted by Tetra-tech in Fountain Valley, Orange County. The event will include breakfast and a tour of their facilities. There is no cost and you will leave with a better understanding of what our world is currently facing in terms of the world wide water crisis.
March 21st: Cocktails For Causes World Water Day Event. 8:00PM.
Where: Whiskey Blue Bar At W the Hotel Westwood – 930 Hilgard Ave., Los Angeles, California 90024
Event information: Cocktails For Causes invites you to their Annual World Water Day Event to support Drop In The Bucket, a non profit organization that builds wells and sanitation systems at schools in Africa. Guests will enjoy music by DJ Tiffany and violin virtuoso, DJ Manifesto. John Travis, President and Co-founder of Drop In The Bucket will also be addressing the audience. Admission is free but we encourage everyone to donate what they can to this fine organization (suggested donation $30/person).
Music by: DJ Tiffany and Violinist DJ Manifesto
Guest Speaker: John Travis, President and Co-founder of Drop In The Bucket
Buy your tickets and show your support for clean water for all by clicking this link
March 23rd: Radio Disney hosted Run/Walk in El Segundo.
The day after World Water Day, we’re putting on an event with Radio Disney in Los Angeles. It will be a walk/run in El Segundo that we are expecting a large crowd for. There will be a Drop in the Bucket presentation at the event with a speaker and we will have a table set up with merchandise, sign-up sheets, stickers, wristbands, and other goodies. Come by and say hi, we’d love to meet you!
If we can explore another planet, isn’t it time we made sure everybody on this planet has access to something as basic as clean water? 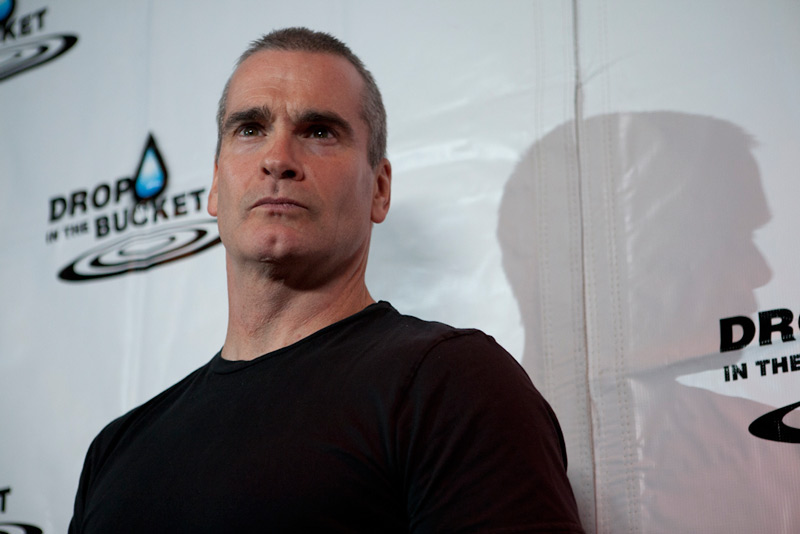 It’s not like anyone is going to debate that fresh, drinkable water is a necessity that’s becoming increasingly hard to come by. But for Henry Rollin spokesman for well-building charity Drop in the Bucket — it’s about remembering that there is a way to help people in parts of the world that don’ as much of it as we do.
On Wednesday, the longtime activist and punk pioneer gathers with friends from various corners of the rock world at the Avalon in Hollywood to for Drop in the Bucket. The goal of this nonprofit organization, founded by John and Stacey Travis, is to build water wells and sanitation systems sub-Saharan Africa. Wednesday night’s bill, headlined by Corey Taylor of Slipknot and Stone Sour, also includes Dave Navarro and Stephen Perkins Of Jane’s Addiction, Scott Ian of Anthrax, Mike Watt of Minutemen, and Kira Roessler, Rollins’ former Black Flag band mate.
Since becoming involved with the charity three years ago, Rollins has gone from a voluntary keynote speaker to an all-out advocate for a cause that most don’t think about on a daily basis.
“When you take a shower, you never ask yourself if water is gonna come out of that spigot — it’s just a no-brainer. In other parts of the world (water) is a more priceless community,” Rollins said in a recent phone conversation.
Having been to various parts of the world — farm towns, slums and shanty towns in Cuba, Madagascar and Haiti — Rollins was more than willing plane (several, actually) to do a three-week stint in South Sudan last year to see the work DITB is doing first hand.
With his help, the charity embarks on its largest fundraiser to date at the Avalon at a time when most people are tightening their belts.
“I don’t think anyone is gonna debate that Drop in the Bucket is a great thing,” Rollins said. “But what is up for debate is can people really afford to give a few bucks when they’re looking at my gas tank, their rent, their stomach and their kids? I understand that we’re trying to tap people that are pretty damn tapped out.
Fortunately,the musicians Rollins helped gather for the organization were ready to hit the stage for the cause, especially Taylor, who had worked on a benefit album in 2002 to raise money for the West Memphis Three.
“He really stepped up,” Rollins said. “He’s our rainmaker, as it were.”
Though he acknowledges this year’s ambitious event came around on pretty short notice, he says Drop in the Bucket is already planning on making this November fundraiser an annual event.
Says Rollins: “There’s a steep learning curve for the organization as far as doing something like this and they’re getting it. But I think that by this t it’ll be even stronger and even more rockin’.”